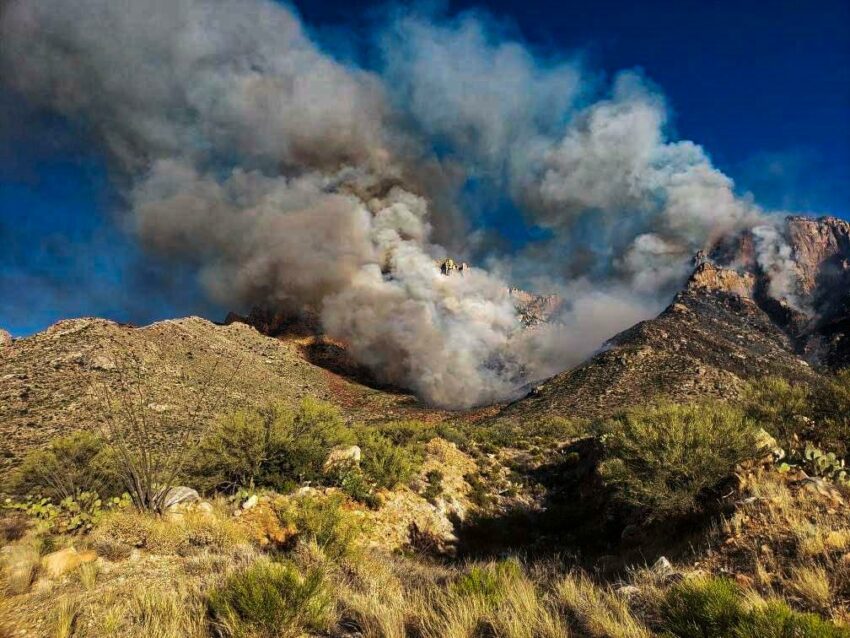 Something is wrong – this was not in the brochure. The ponderosa ridgelines are rimmed with black and spindled pine. Spruce and fir trees drop their needles and stand dead or dying or ready to die, the mountains cloaked in grayish brown and brownish gray, not so much a color as an absence of color, a reminder that we live in dark times. Beneath this dying, spruce beetles and pine beetles and budworms gorge and the trees seethe with life.

These views of dead mountains are disturbing. Western forests will heal and endure, but they are sick, their ailments ranging from mild to terminal. Every summer, fires take out more trees and the newspapers carry images of men and women on the line, orange walls of flame, dark plumes of smoke. There’s history here, a story that began before the climate changed or the beetles came to feast or vacation homes sprang up in the forest.

The history of fire was once confined to academic conferences, but it has begun to insert itself into the mainstream, and now every fire season Stephen J. Pyne is called upon to explain, once more, how we got here.

The professor is this voice of reason whenever the high country is burning or has recently burned. He has studied fire across the globe, learned its ways, tracked its history and jumped from the history department to biology. He gives reporters straight answers when they come with their questions, as they do each summer. Why is the forest burning? Well, that’s what the forests do. It’s what they have always done and what they will continue to do. Fire and forests have always interacted because the forests are alive and fire exists where life exists. Fire itself is not alive, but it has the properties of a living system, he explains. We should know all this by now, humans have been using fire since homo erectus, but we are getting ahead of ourselves.

Let’s start with Pyne’s first book on the subject, Fire in America. American Indians used fire for cooking, light, heat, communication, to bring down trees and shape canoes, cultivate grasses, berries and nuts. It was used for ceremonies and to drive game. Southwestern forests evolved in a world of lightning, where small fires took out scrub and young trees, leaving mature trees with stout trunks that could withstand flame on the forest floor, trees with tall crowns that were out of reach from fire. Thick grasses carried these fires, which flashed and died when they ran out of fuel.

All that changed when American settlers arrived and drove off the wolf, fenced the Apaches, clawed at mountains and cut down trees. Their cattle fattened on tall grass and logging slash dried in the sun. Erosion followed, brush took root and fuel on the ground began to change.

Several visions of the American West intertwined in ways that historians have only recently begun to untangle as forestry, the timber industry, outdoor recreation, transportation, mining, policy, politics, economics, wildfire, urban and rural lifestyles and American ideas about wilderness evolved on the western landscape.

For years, Congress stuck to the old model to settle the West – give land to farmers, but most of the farmers went broke. Copper kings, timber barons, railroad magnates and grifters seized what they could, sold it or swapped it for some new project, and grew richer with each new transaction. Ranchers took advantage of cheap grass, but struggled after an initial boom and crash. Much of the land stayed in the public domain, managed by a small, under-funded agency called the Forest Service.

The fuel on the ground continued to change until the tallest trees were no longer out of reach from fire, they were merely the tallest rungs on a ladder, and in 1910 a big burn gave the nation a glimpse of what was to come and what was at stake. Fires swept through the national forests of Washington, Idaho and Montana and about 100 men lost their lives.

The Forest Service received more funding, but the young agency had a choice to make about fire. Herders, settlers and the Southern Pacific Railroad had all used indigenous fire practices to clear land, but the Forest Service was made up of men trained in forestry, who considered the practice wasteful.

Years passed, most of the West remained unsettled. Had the laissez-faire taming of the landscape continued, The American West may have become a patchwork of farms and settlements, and wildfire would have been rare, Pyne writes. Without settlement, those lands would be conduits for fire. “In retrospect, the choices seem obvious: either convert those lands to something less combustible or do the burning yourself,” Pyne writes.

By the 1930s, foresters wondered if fire was essential to the longleaf pine, and after half a century of fire suppression, some began to question the national policy of putting out fires. Forest Service leaders, who had lived through fire, “had counted its costs, buried its dead,” weren’t listening, Pyne writes in Smokechasing. In 1935 Ferdinand Augustus Silcox issued the 10 a.m. Policy, which stated that every fire would be put out by midmorning the day after it was reported.

A post-World War II housing boom led to a rising demand for timber, changes within the Forest Service, Congressional funding, and roads. The agency continued to emphasize forestry over wilderness, and foresters still saw fire as wasteful, in spite of growing evidence that its presence was part of a healthy ponderosa forest.

By the 1970s, the agency began to shift its priorities from timber to recreation as clear cuts came under attack and environmentalists questioned long-standing policies. A series of court rulings held that old growth forests were beneficial to certain species of wildlife, such as the spotted owl, and by the 1990s, the Forest Service began to phase out logging throughout much of the West.

Federal agencies started to bring fire back to the landscape through prescribed burns and to segregate fire by its cause, location and proximity to homes. Then sprawl “carpet bombed the countryside with houses” and things got complicated.

As public lands agencies wrestled with questions of how to thin the forest, fire started doing the job itself. Fires across the West got bigger and hotter. Some blame climate change for this mess, but the factors that led to big fires were already in place before climate change became a factor, Pyne said. Climate just exasperates the situation, and here we are.

“One of the reasons we can’t manage fire is that we can’t decide what we want the land to be, and there are conflicting views, all of which have different prescriptions for fire. And then we have to negotiate with fire, which really isn’t listening.”

Some fires burn so hot today that firefighters have little choice but to get out of the way, using a box and burn strategy that contains the blaze and thins the forest. In Arizona, the the Bush and Bighorn Fires jumped from one ecosystem to the next.

History teaches us that the past is never really that far gone, or to paraphrase Faulkner, not even past. More fires are coming. The only question is how hot they will burn.